HOW TO TEMPER A KNIFE

The best approach to make a knife that is both comfortable to use and durable is to temper it. These are opposing qualities that a good knife could have, yet they go hand in hand. This step is crucial since it strengthens your knife’s blade. However, if not done correctly, this process might turn your beloved blade into fragile glass.

Knowing how to properly temper a knife is crucial to ensuring that it does not do more damage than good. If you want to accomplish things well, do you need to hire a professional? Not at all, really. I promise that after reading this post, you will be able to temper a blade like an expert.

The maximum hardness of a steel grade, which is reached via hardening, provides the material a low toughness. Tempering lessens the hardness of the material and enhances the toughness. Through tempering you may tailor materials qualities (hardness/toughness ratio) to a particular application.

Why Do People Temper Knives?

Knives are tempered by being heated for roughly 2 hours at temperatures ranging from 347°F to 662°F. The process occurs after hardening and improves the toughness of iron-based alloys used in making blades. To make it flexible without being so soft as to shatter on contact, a hardness of 53 to 63 HRC is desired.

Having looked at what knife tempering entails, I’m sure you would have noticed that it is crucial to get the temperature correct to guarantee you receive your desired completed result. What I mean is that you shouldn’t aim for a hard knife and end up with a soft one, and vice versa. So, what is the greatest approach step-wise technique to tamper your blade?

The very first thing to do is sharpen your blade so it’s ready to take on whatever comes next. To achieve this, you need to first clean rid of left-over carbon buildup on your knife. To achieve this, you need sandpaper of roughly 180grit. This would be used for flat sanding the edge of the blade. This is done to dull it and also prevent it from warping or breaking. After that, wipe out the area with an acetone-soaked towel to get rid of any remaining chemical residue. This method fully removes the knife of any left-over residue.

This is the following stage, and it’s often known as normalizing. The blade’s steel structure is stabilized by repeatedly heating it to a high temperature in order to harden it, but it is still in its unhardened state. The goal is to make structural adjustments to the knife so that it is both durable and malleable. When it comes time to quench the knife, the increased resilience of the blade against warping will come in handy. Using a magnet, determine whether the knife has reached a critical temperature (at which point it will no longer be magnetic), and then cool it to room temperature. To ensure normalization, do this procedure three times.

If you don’t have access to a forge, you may do this in a regular oven or toaster oven, and the heat will be dispersed evenly all the way around the knife. To get the most accurate results when testing against a magnet, put it in the oven for at least one hour before doing so.

Make sure you have all the necessary equipment before moving on to this stage. You’ll need a pair of pliers and a container with a lid. Keep in mind that the knife will become very hot throughout the quenching process, therefore the container you choose should be made of something that won’t melt if exposed to flame. You also need a lid that is airtight to guarantee the container can smother the flames.

When you’ve got enough water in the container, use a different color to designate the level where your knife would sit. It’s also a good idea to have a regulator block on hand, as well as some nails to help you keep track of where you buried the block below the oil. This will lessen the chances of warping as a consequence of one side cooling quicker than the other side cools.

The oil is used to quench and should thus possess properties that make this process simple. You may check this out by warming it up. You may also ascertain the precise temperature you would be needed for this by heating the water put in the container. It is also crucial to obtain a fire extinguisher (BC) handy to tackle unanticipated incidents.

After normalizing, return your blade back to the oven/forge, heat it again evenly, and then gently immerse it into the oil in the quenching container. Ensure you do this in such a manner that the oil does not spill out of the quenching container while making sure the knife does not lose substantial heat. Then put it on top of the regulator block and leave it for around 15sec. Next, dip it into the oil again. After 45 seconds, when the oil has stopped hissing and boiling, take the knife out of the oil and set it somewhere cold to dry. Cover the container containing the fire extinguisher to prevent any further spread of flames.

You may be sure the technique was successful by placing a file on the knife’s bevel and examining it. Using up and down and back and forth motions, travel the length of the file. If the file has a glassy texture, it’s ready to be processed.

It is advisable you temper your knife outside your kitchen to prevent smoking the kitchen with residual oil in the oven. Thus, if you can’t afford an outside forge, it’s best to use a toaster oven. If you just have access to a kitchen oven, however, be careful to first wash away any extra oil with dishwashing liquid. The odor of burning oil should go after this.

You can get the optimal tempering temperature for your knife online, after you’ve identified the specific iron-based alloy it’s manufactured from. Heat your knife to the proper verified temperature for approximately an hour, let it to cool down to room temperature, and then set it back to heat up for an hour again. You’ll need to do this three times to acquire a knife with the right temper for your needs.

Repetition of Step 1 is necessary to remove any oil accumulation or residue that may have accumulated during the preceding steps. In this phase, though, we’ll start with a lower-grit stone, 220 grit or less. Then we’ll go on to a coarser gritstone until you’ve achieved the edge you’re looking for. In doing so, the knife’s edge would be protected and its smoothness maximized. Once you’ve completed these steps, your knife will be properly tempered and ready for use.

How many degrees does a knife need to be tempered?

A. It is essential that the steel be heated to a temperature of 400 degrees Fahrenheit as soon as possible in order to de-stress it and prevent further hardening. This procedure, known as tempering, can be carried out over an open flame or with the assistance of a blowtorch; however, the most straightforward approach is to carry it out in an oven preheated to 400 degrees Fahrenheit for a total of two cycles of one hour each, with the knife being allowed to cool down in between each cycle.

After tempering, do you use a quench?

The majority of the time, tempering is carried out on steel that has been quenched after being heated to a temperature that is higher than its upper critical temperature (A3) and then rapidly cooled through a process known as quenching, using techniques such as submerging the hot steel in water, oil, or using forced air.

Is tempering used to reduce hardness?

Because unaltered steel is highly hard but also excessively brittle for most industrial uses, tempering is often conducted after hardening in order to lessen the amount of excess hardness that was created. The properties of ductility, hardness, strength, structural stability, and toughness may all be altered by tempering.

Is it possible to heat serve a knife in the oven?

The blade is heated to a temperature that is not essential (between 350 and 450 degrees Fahrenheit) in the process of tempering. This causes the steel to become somewhat more malleable (kitchen oven). A blade that has been properly tempered will keep its edge while also retaining its strength and flexibility.

How are tempering and hardening different from each other?

The process of increasing the hardness of a metal may be accomplished by either hardening or quenching. The process of heating a material to a temperature that is just below the critical range for that substance, maintaining it at that temperature, and then allowing it to cool is known as tempering.

What are some of the drawbacks of the tempering?

The downside of using this technique of tempering is that it is unable to produce a high cooling rate at temperatures ranging from 400 to 600 degrees Celsius when used in hot conditions. In this context, the stepwise steel tempering process is an option for carbon steel products that have a relatively narrow cross-section (diameter up to 10 mm, for example, drills).

What makes a temper different from a quench?

Quenching is the act of rapidly cooling a workpiece that has been subjected to heat treatment, while tempering is a procedure that entails subjecting iron-based alloys to heat treatment in order to raise their level of toughness.

There are many uses for a knife, and knowing how to properly temper it is a skill everyone should have. Nonetheless, you could ruin your knife if you don’t know what you’re doing.

Therefore, it is essential to have a thorough tutorial on how to temper a knife so that everyone may do it correctly. We encourage you to give DIY blade tempering a try using this guide and to share your experience with us. 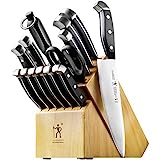 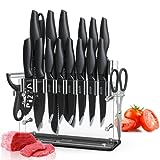