The Benefits and Drawbacks of a Knife with a Single Bevel

The quality of the ingredients, the skill of the chef, and the precision of the cooking implements all come together to create a delicious dinner. The knife you use is one of the many culinary tools that may improve or ruin your dinner. Hence, it is vital to pay careful attention to the sort of knife selected since there are various knives for different uses.

The Western world has traditionally used blades with two bevels. It’s quite unlikely that you’ll ever find an exception to this rule. However, single bevel blades have been trending upward in popularity recently. Why is this so? Is there any benefit to using a knife with a single bevel that we’re missing? Is there any downside to utilizing the product? When comparing these two knife blades, what should you look out for?

In this piece, we shall discuss these and other related topics. So, if you would want to know everything about the benefits and downsides of a single bevel knife then join us as we go into a full review.

The angle of sharpening that you use on a knife with a single bevel should be between between 15 and 17 degrees. This results in an edge that is very fine or sharp, which is crucial for cutting delicate foods like fish, shellfish, meat, and vegetables.

What is a Knife Bevel?

For now, let’s just define a “bevel knife” so we’re on the same page. The term “bevel knife” is often used to describe the angle of the edge of a blade. Single bevel knives and double bevel knives are the two common varieties of bevels. Bevels on knives vary from one model to the next and from one purpose to another.

There are benefits and drawbacks to using knives with a variety of bevels. If you don’t think about the bevel blade before buying a kitchen knife, you can end up with one that doesn’t accomplish the job you need it to.

A single bevel knife, also known as a chisel edge blade, is often used for Japanese knives and is ideal for slicing delicate foods like meat, cheese, veggies, etc. One facet of this bevel is grounded, while the other is completely flat. A fairly sharp edge of 12-15 degrees makes it ideal for precise slicing.

Those who have mastered a variety of cutting methods can benefit greatly from using a single bevel knife. If you want to make your meat or veggies as thin as paper, this knife is up to the task. Because of the flat nature of one section of the knife, both right- and left-handed options are readily accessible.

Sharpened on Both Sides

As the knife edge of a double bevel knife is grounded on both sides, it is more resistant to breaking and rolling. When seen from the side, it has a V form that tapers into a point, giving it a very western air.

It’s not quite as sharp as single bevel knives, but it’s still razor sharp. It is also ideal for varied household usage particularly for people with mediocre cutting abilities. Double bevel knives are functional, and have a reasonable performance. Use them to cut vegetables or anything else you need a knife for.

Distinctions Between Single- and Double-Bevel Knives

It’s a common misconception that single and double bevel blades are interchangeable for every cutting job. Comparing the two will help shed light on the intricacies of single bevel blades.

The edge of a single bevel knife is typically between 12 and 15 degrees, making it one of the sharpest types of knives available. A double bevel’s total angle is often about 20 degrees, reflecting the fact that each side has its own angle.

However, technological advancements have caused double bevel knife angles to decrease. Nonetheless, due to the reduced angle of their blades, single edge knives are more efficient.

Improved sharpness leads to pinpoint accuracy. Because of this, a single bevel knife can easily and precisely cut through food. Generally speaking, a sharper knife will cut through food more cleanly and efficiently than a dull one.

In light of this, single bevel knives are superior than double bevel blades when it comes to creating the finest sushi.

Double bevel blades are less sharp yet last longer than single bevel blades. That’s why double-bevel knives are more durable. This is because a thinner blade’s edges will chip off more easily, rendering it useless in short order.

For this reason, dishes containing hard parts are not well suited for use with single-bevel knives e.g., meat with bones, avocadoes, and so on.

Sharpening is considered a key benefit of single bevel blades. As they just have one edge, single bevel blades are simpler to maintain than their double-edged counterparts. Consequently, you won’t have to worry about anything other than nailing the edge.

There are numerous of advantages to utilizing single bevel blades, these include:

Single bevel blades are great for cutting and are efficient, but they aren’t for everyone. Some drawbacks of using a knife with just one bevel are as follows:

For that reason, they are not ideally suited for use in demanding applications.

How should a knife bevel be done properly?

A bevel angle of twenty degrees is a suitable starting point since it simplifies things. The 20-degree angle is suitable for most knives if it is honed to the appropriate degree. If you are worried about obtaining more performance out of your knife, you may fine-tune the bevel angle to fit the unique requirements of your knife. This is something that you can do if you have the knife.

What exactly does it mean when a knife blade has a bevel?

The bevel of a knife is one of the most essential characteristics, as it helps to determine the knife’s sharpness as well as its strength, longevity, and purpose. To put it more simply, a bevel is the ground angle and form of the blade’s edge. The sort of knife you have may be determined by the material it’s constructed of and how it’s ground, so it’s important to pay attention to both of these factors.

The simplest approach to find out is to inquire about it with the company that made the knife. As a rule of thumb, knife edges have a 20-degree bevel on European and American blades created before 2010, but knife edges on Asian-style knives have a 15-degree bevel. Having said that, this general guideline does have some room for wiggle room.

How sharp are most knives used in the kitchen?

The majority of knives used in kitchens are sharpened at an angle between 17 and 20 degrees. The angle formed by many Western knife blades ranges between 20 and 22 degrees. The cutting edges of Asian knives that are marketed in the United States often have a more acute angle, and they are honed to around 15 degrees on both sides.

What happens if a knife is sharpened to an excessive degree?

When a knife is sharpened, a little portion of the edge is removed in the process. After some time, the backside of the major bevel on the edge will develop a thick, wedge-like profile.

Pros and cons of single bevel knife. If you are not a competent chef, deciding between a single- and double-bevel knife might be difficult. Although the amount of bevels on a knife may seem inconsequential, it may have a significant impact on the final flavor of your dishes. To put it another way, not all knives are created equal.

To help you get a handle on the situation, we’ve laid out the advantages and disadvantages of both single- and double-bevel knives. Using this knowledge, you may choose the optimal blade for the job at hand. The flavor of your food will be maximized in this way.

BEST KNIFE FOR TOMATOES
Bestseller No. 1 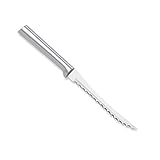 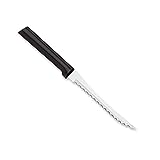