Looking to get into sewing but don’t know where to start? A sit-down, long arm Juki sewing machine could be just what you need if you’ve been a fan of the brand for some time.

There are well-known features that boost productivity and control in the Juki heavy duty sewing machine, which is built using tried and proven techniques from Juki.

For example, they include a built-in thread trimmer and an LCD screen that blend together seamlessly.

However, some consumers have expressed dissatisfaction with elements of the electronics that need to be improved by the manufacturer.

Inexperienced seamstresses may also be put off by the large variations between this machine and others, which may need more time to master.

A long arm sewing machine is something you need, but you’re not sure the Juki TL-2200QVP-S is the one. Here, we provide you with all of the facts, both good and bad, so you can make an informed choice. 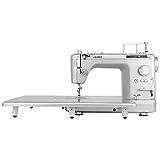 As long as you don’t notice the LCD panel on top, the machine looks and feels like an old-fashioned sewing machine.

There is a sense that you are using an old-time variant like your grandmother or mother could have used because of the narrow and blockish appearance of the machine and how thread is positioned.

Optional attachments, which are available for purchase separately, include the following

Optional attachments, which are available for purchase separately, include the following

Other sewing machine manufacturers followed suit, but Juki was the first, and they’ve maintained their position as the industry leader ever since.

In addition to selling their items in Japan, they also sell them in other nations across the globe.

Juki has been in the home sewing machine business for more than 60 years, starting in 1945 and producing their first models for the consumer market in the 1970s.

However, this long arm sewing machine includes a working area that can be expanded to an additional 18 inches in length and 10 inches in height.

To accommodate even the biggest sewing tasks, the supplied table and stand can be expanded to a maximum of 34 inches in height and 35 inches in width.

Optional leafs, which are not included with this machine but can be purchased on Juki’s website, may expand the adjustable table to a maximum width of 50 inches.

When it comes to this long arm sewing machine, it’s evident that Juki is dedicated to producing only the finest.

To make life even easier, the foot control on the automated under-bed thread trimmer is also included. This greatly simplifies mid-project management for users.

Despite its retro appearance, the LCD touchscreen control panel puts this machine into the modern day.

In addition to allowing you to change your speed and save time on future setups, the touchscreen panel also enables you preset your favorite settings.

TL-2200QVP Stand-Up Frame is an available

Assuming the stand-up frame for your Juki TL-2200QVP machine is already built into your setup, you may be concerned that purchasing a sit-only machine may be problematic. Have no worry!

Using the same specifications as the TL-2200QVP, the Juki TL-2200QVP-S may be converted into a stand-up sewing machine.

Users who are concerned about computer malfunctions and button failures may like having this added level of control.

Some customers have complained about the lack of instructions supplied with this sit-down sewing machine’s table assembly.

Parts for an older Juki sewing machine, which this machine does not require, are also included in the package.

Inexperienced users may find this confusing, and it demonstrates a lack of attention to detail in quality assurance.

Electronic components, such as the LCD screen, have been discovered to need replacement by other long arm sewing machine users.

It is possible for Juki to deliver these updates, however this may be problematic for consumers who want to get a system that is already updated.

Other Home Machines’ Thread Tension Is Quite Different. Juki sewing machines are distinct from other tiny home machines because of the unique manner the tension disks are operated in them.

If you’ve never sewn before, this may not be an issue for you. But if you’ve sewn on other machines before, you could find it aggravating how much the thread needs to be dragged into the tension discs.

Designed to withstand the rigors of daily use, this heavy-duty equipment is intended to last.

When it comes to handling huge projects and avoiding damage, the Juki TL-2200QVP has shown to be a reliable printer for years after its first purchase.

It’s reassuring to know that a machine like this won’t break the bank since they may be rather pricey.

Tables That Can Be Adjusted

The sewing table that comes with this machine is one of the true attractions of this machine, making it a sit-down sewing machine.

It’s even better since it’s customizable, allowing you to customize your machine to your exact preferences. Once the table is put up, you may adjust it so that you can sew standing up or sitting down.

You won’t have to worry about your table collapsing in the middle of your sewing session since it is solid and spacious enough to accommodate many layers of heavy quilts and materials.

Additionally, if you’re up for a major undertaking, you may always add leaf extensions to provide more room.

There are several features on the Juki Sit-Down Long Arm Sewing Machine that make it easier for sewers to work fast.

When it comes to sewing efficiently, no feature is too tiny, from the automated thread cutter to the automatic bobbin large yarn winder.

Inexperienced sewers and those who have just switched to a Juki will benefit from this information as well.

Almost all of these features are programmable, so you don’t have to re-enter all of your preferences every time you start a new project.

With this Juki, you’ll never be in the dark again thanks to the dual-directional LED lights.

If you discover a flaw in the design or construction of any of these components, please notify Juki immediately so that they can determine whether to replace or repair them at no additional cost to you.

Just remember to take good care of your Juki TL-2200QVP-S, since normal wear and tear or accidents are not covered by the guarantee.

Ideal for Professionals and Businesses

An abundance of storage and a strong framework show that it was designed with the business sewer in mind.

With the Juki TL-2200QVP-S, those who are already in business or planning to do so won’t have to put their creativity on hold.

Let us now provide answers to some of the questions that are asked about the juki 2200 sit down review: 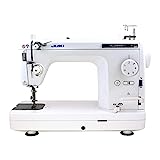 A long-lasting, high-quality sewing machine like the Juki TL-2200QVP-S Sewing Machine is something we’d suggest to everyone in need of one.

In the event of a malfunction, the machine is covered by the regular Juki guarantee as well as a host of convenient automated functions.

You should be aware, however, that if you are already familiar with the use of computerized sewing machines from companies other than Juki, there may be a learning curve with this mechanical-leaning sewing machine

w3onlineshopping.com team and our families are supported thanks to affiliate commissions that we may earn when you buy through links on our site. Read more

Hello there, my name is Aithley Balder from Texas. I am a cookware, technology enthusiast and I have been sharing my passion with my friends and likeminded folks for close to 4 years now. Don’t hesitate to get in touch with me via the contact page.

w3onlineshopping.com is a participant in the Amazon Services LLC Associates Program, an affiliate advertising program designed to provide a means for us to earn fees by linking to Amazon.com and affiliated sites. Additionally, w3onlineshopping.com participates in various other affiliate programs, and we sometimes get a commission through purchases made through our links.

Necessary Always Enabled
Necessary cookies are absolutely essential for the website to function properly. These cookies ensure basic functionalities and security features of the website, anonymously.
Functional
Functional cookies help to perform certain functionalities like sharing the content of the website on social media platforms, collect feedbacks, and other third-party features.
Performance
Performance cookies are used to understand and analyze the key performance indexes of the website which helps in delivering a better user experience for the visitors.
Analytics
Analytical cookies are used to understand how visitors interact with the website. These cookies help provide information on metrics the number of visitors, bounce rate, traffic source, etc.
Advertisement
Advertisement cookies are used to provide visitors with relevant ads and marketing campaigns. These cookies track visitors across websites and collect information to provide customized ads.
Others
Other uncategorized cookies are those that are being analyzed and have not been classified into a category as yet.
Powered by