CAT5 VS CAT6 CABLES: WHICH ONE SHOULD YOU CHOOSE? DIFFERENCE BETWEEN CAT 5 AND CAT 6

The most popular usage for cables is as network connections, but they may be used for many other things as well. A network consists of many systems that are connected to one another and may communicate resources with one another. Nowadays, with the advancement of technology, the Ethernet cabling system has been improved to meet the needs of the end user community. The latest versions provide higher speed, data connectivity, and less error. Cat5 and Cat6 are two of the most widely used Ethernet cables, but which is the best choice? We’ll make some effort to discover an answer to this essential issue right now.

In the home and small business, Cat5 or category 5 ethernet cable is used to connect computers to the network. The termination point uses RJ45 connections and the cable is constructed of four twisted pairs of copper wire. These may be used to transmit files between computers.

Using this networking connection, you may transmit data at rates ranging from 10 to 100 Mbps and at frequencies as high as 100 MHz. The maximum length of the connection should not exceed 100 meters in order to avoid network concerns such as data loss or latency issues.

Cat5 cables are divided into two categories: cat5 and cat5E cables (which is an abbreviation for “Cat5 Enhanced”).  It provides significantly improved performance over the previous Cat5 cable, including up 10 times faster speeds and a significantly greater ability to traverse long distances without being impacted by crosstalk.

Category 6 cable, often known as cat6 cable, is an Ethernet cable that is constructed up of four twisted-pair copper wires and ends with an RJ-45 standard connector, which is commonly seen in residential and business networking applications. Communication data rates of up to 1 Gigabit per second supported by Cat6. This high bandwidth allows to transport large – scale data files quickly, as well as to communicate and broadcast video games.

Cat6A cable is the newest variant, and it has a thick plastic wrapping that helps to decrease crosstalk. The most significant distinction between Cat6 and Cat6A cables is that Cat6A cables can sustain 10 Gigabit speeds over the whole length of the Ethernet connection (328 feet).

what is the difference between cat 5 and cat 6

Speed Variation due to Frequency

Cat6 cable can handle more data than cat5  because Cat6 cable runs at up to 250 MHz. Cat5 cable supports 100 MHz frequencies, half of Cat6.

Choose the perfect Ethernet cable for your home or office network. Cable type and category not only impact speed and overall performance, but also the quality of your connection. 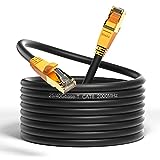 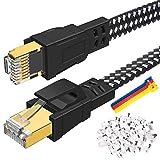